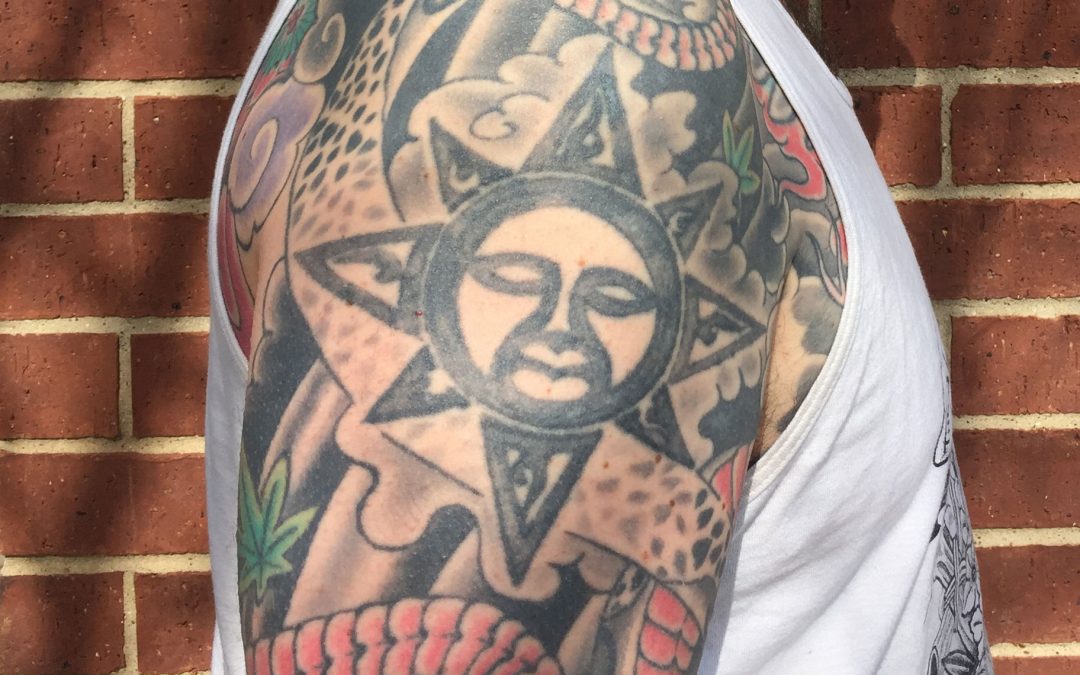 It was the spring of 1996 when I started 7th grade at Monnig middle school in Fort Worth. I was 13.  My friends and I would skip class and stroll around town, dodging truancy officers, getting in and out of trouble, and committing minor acts of vandalism and petty theft. Starting back at the mall  we would make our way down Camp Bowie blvd. We would stop in at Zoo music and noodle around on some guitars that were out of our price range, smoke some cigarettes, and make our way back around to the school to catch the bus home. Headed back to school we would always pass Bonehead Tattoo shop.

I would look through the plate glass window in front to see black and grey skulls and demons on the walls intermingled with a few bits of tribal and naked women. Looking further in, I could see a burly tattooed man working on a customer. The guy in the back I later learned was a local tattoo hero by the name of Troll. He was great at large scale custom tattooing in the area when it wasn’t a common thing. Soon this became the highlight of the day, stopping by the tattoo shop on the way back to the bus stop and grabbing sneak peaks of the mysteries inside.

I was way into Heavy Metal and Punk Rock at the time and started noticing tattoos everywhere, in music and the neighborhood. I knew I had to have one but I had a 5 year wait til I turned 18!

After that summer my parents split up and I moved out west with my Mom and two younger siblings. We were in the dreaded country! There wasn’t a mall in sight. Gravel roads and poison ivy were more common than tattoo shops and guitar stores. I was in teenage Hell in my opinion. All of this made my desire to get tattooed stronger than ever. I would sketch tribal designs in my notebooks and create mock ups of future tattoo plans.

Finally some time passed and my 18th birthday was right around the corner. I’m a Virgo, so we were coming out of the heat of Texas summer and things were starting to cool down a bit. I had already gotten some birthday money in the mail and I hit up my folks for some birthday cash (not mentioning that I was planning to spend it on a tattoo).

I remembered the shop in Fort Worth and had already looked them up in the phonebook. At the time, studying the different tattoo shop adds in the phonebook was a favorite pastime of mine. I hadn’t discovered tattoo magazines yet so this was the next best thing. I seem to remember Randy Adams had a pretty great ad, also Primal Image, and Monkey Wrench Tattoo, (I later learned was Trolls new shop). But I already had a customer loyalty to Bonehead Tattoo from my middle school days, and a couple of my older buddies had been tattooed there earlier that summer, so thats who I called once I worked up the courage to pick up the phone. I had never been tattooed before so I decided to give them a call and see how the whole process worked. The phone rang for a bit before a man picked up on the other end. My first question was “how much for a tribal sun?” He said they wouldn’t give me a quote on the phone. I asked if I could set an appointment, and he replied they do “walk ins only” I thought to myself “This may be a little harder than I anticipated”.

Despite the unenthusiastic phone conversation with the tattoo parlor, I stayed focused on my goal.  I got a bit of info from my school buddies and it didn’t take much convincing to get my pal, Brad Simmons, to come along for the day trip to the tattoo shop a couple of towns over. Brad was the first kid I knew with a professional tattoo, so he could walk me through the steps. We loaded up in my Chrysler and headed East.

It’s about a thirty minute drive to West Fort Worth from our town, not a long drive, but plenty of time for the anxiety to build. As we pulled into the parking lot my adrenaline kicked in. It was a pleasant mixture of nerves and excitement that  gives you a rush that only an 18 year old kid can appreciate. We walked through the door and stepped into the lobby. The business had moved locations since my middle school days but was under the same owner. I shook off the nerves and played it cool. We looked at some Flash on the walls and I contemplated switching my idea to a skull or barbed wire design, but decided to stick with the tribal sun pattern i had sketched up the week before. I took my sketchbook to the counter and waited on service.

It wasn’t too long before a young tattooed woman came out of the back. I showed her my design and she took it back for the artist to look at. She told me to hang out a bit while he got the drawing ready. I went back to the two big flash racks and flipped through more designs.

After about 45 minutes a South African guy by the name of Julian came out of the back with a sharp symmetrical design based on my sketch. I was surprised but glad  that he took the time to fix the mistakes in my drawing. In retrospect, it was my first lesson in tattoo design. He explained why lines needed to be a certain distance apart and how the image would hold up in the skin. He had three different sizes to choose from. I wanted the big design but could only afford the medium size, so the deal was settled. He led me to the back for the procedure.

Their shop was pretty cool. There were semi-private booths that had a cut out window to the lobby. Only the tattoo client was allowed back but your friends could watch through the window. when i got back there, his machines were already set up, further concealing the mystery of the process and peaking my early interest in tattooing. The first sting of the needle stands out in my mind, but the thing that really got me was the time it took. I was surprised how long the application took. Including smoke brakes I sat for four hours. Not a bad deal for $200! When he was finished it was perfect black ink. I had begun my journey on the path to a career in tattooing.

In the following years I got tattooed as often as I could afford it. Learning more about the culture through the tattoo magazines of the era. I fell in love with old school styles by artists I read about  such as Cap Colman, Bert Grimm, Bob Shaw, and then into the contemporary artist like Ed Hardy and Dan Higgs. When they would cover the Dallas Tattoo convention, I would see pics from local artists and discovered  the local old school guys.

Before social media and the internet it was a challenge to get tattooed. That journey is part of who I am today and it is an ongoing one with new surprises around every corner.  I am thankful for all of my tattoo experiences,  both good and bad, because I  learned something each time I sat in the chair. I have never covered up any of my tattoos and I wear my tribal sun to this day, with pride. 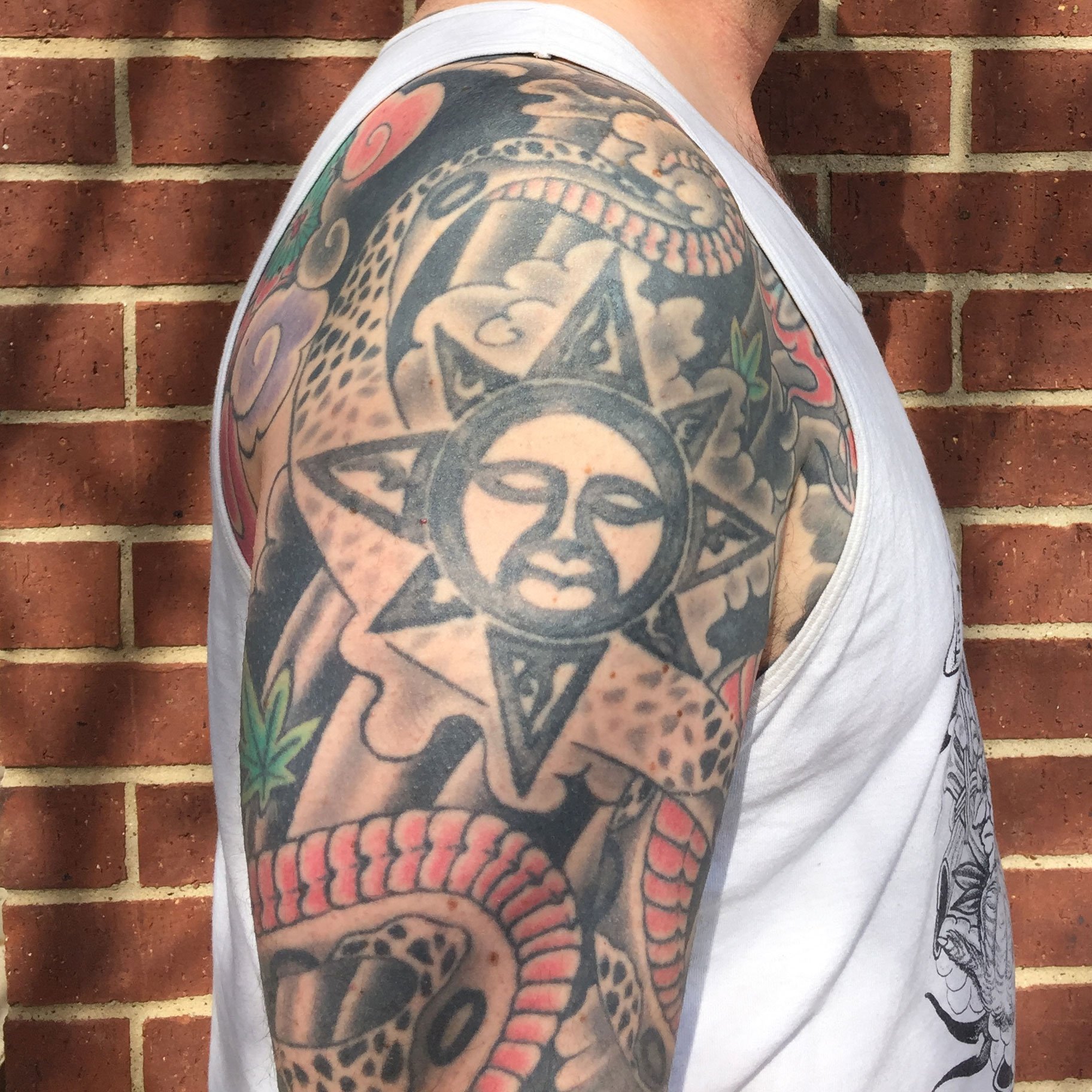